Boosting energy efficiency: how low temperature heating can help save up to 30% energy

In an effort to make our buildings more energy efficient, many people are switching to low temperature heating. In older buildings this often involves the installation of a new boiler, which in turn entails the replacement of most of the radiators. The decision to renovate the heating system therefore implies a certain cost, but this will no doubt be recouped in the long run due to the reduced energy consumption, which, according to our study, can be as high as 30%. Naturally, the exact savings potential must be calculated individually since every property is different and general recommendations can only serve as a guideline. It is a fact, however, that modern heating technology only develops its maximum potential when generators, emitters and control technology are optimally matched. 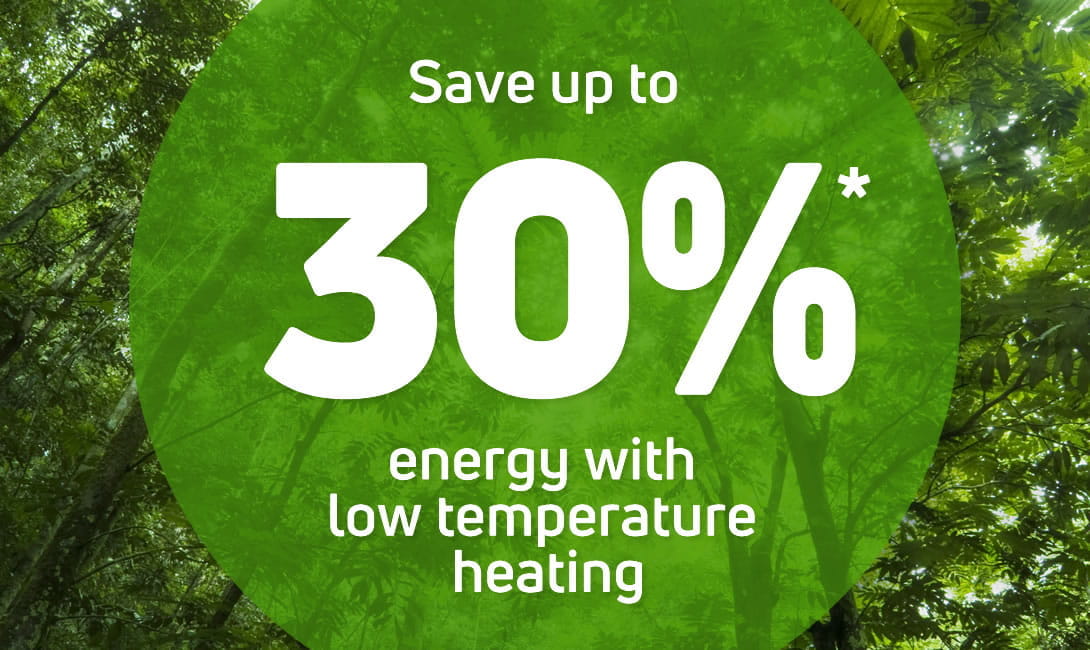 Renovating heating systems to save energy

Since buildings are responsible for approximately 40% of global energy consumption and HVAC systems account for almost half of this consumed energy, the heating and cooling system plays an important role in saving energy. However, this savings potential can only be maximised if the building and the system technology are considered as a whole.

Lowering the system temperatures with the help of condensing technology is a step in the right direction. If the system temperatures are low, more heat can be recovered from the flue gas, which reduces heat loss and increases the efficiency of the heating system. To exploit the full savings potential of condensing technology, modern control technology and the use of renewable energy (e.g. solar support) are required.

This means that when a new boiler is installed and the system temperatures are lowered, the heat emitters, which in most cases are radiators, should be matched to the new temperature regime. Technical developments and various design measures, including the shape and arrangement of the convector plates, have ensured that radiators are now much more efficient. This allows them to provide the same heat output as old radiators of the same size with lower system temperatures. Today, we even have fan-assisted radiators, such as the Ulow E2, and fan convectors, like the iVector S2, that can be operated at temperatures below 40 °C.

Although it would be a dream scenario for both building owners and the planet to be able to save a significant amount of energy with just one or two interventions, it unfortunately doesn’t work that way. In reality, we see that it’s more often a long-term process in which occasional optimisations are carried out in line with the available budget and time. That is exactly what was simulated in a study we commissioned already several years ago. Although we are well aware that both building techniques and heating technology have since been further developed, the laws of thermodynamics remain the same and the example is still very relevant today.

The study compares the energy consumption in a 18 m2 living space before and after energy-saving measures are applied. In its initial state the room has a heat demand of 125 W/m2, amounting to 2250 W. Old sectional radiators 110/600 according to DIN 4703 are used with standard temperatures of 90/70/20 °C. To meet the heat demand, the radiators are 1600 mm long.

In the first instance, the building’s thermal insulation is optimised, which nearly halves the heat demand to 1170 W. This allows for lower flow temperatures of 62/50/20 °C. The system temperatures can initially be reduced using the existing boiler. However, a new condensing boiler will allow for a higher efficiency.

In order to further optimise the system’s energy consumption and ensure that the heat emitters are a good match for the new temperature regime, the study replaces the sectional radiators with modern type 22 radiators. When the length of the radiators remains 1600 mm, these new radiators allow the system temperatures to be lowered even further to 50/41/20 °C.

Combining all these energy-saving measures yields several benefits. First of all, the optimised insulation minimises heat loss from cracks in the walls, windows and doors and is a prerequisite for the use of a heat pump, in case this is installed later on. Secondly, the lower system temperatures reduce the heat losses in the distribution lines and allow for an optimal use of a condensing boiler. The new radiators, in turn, incorporate more efficient control technology, allowing for precise temperature control to further optimise energy consumption. The study shows that when all measures are combined it’s possible to save 15 to 30% energy compared to the old situation. The improved indoor climate comfort this creates is a bonus for the occupants of the building.

As the study underlines, several puzzle pieces are required to reach the desired result. Improving our buildings’ energy efficiency and reducing our energy bills as well as our impact on climate change is a step-by-step process in which each intervention contributes to the end result. Provided that a building is properly insulated and its U-values are optimised, a renovation of the heating system with a new boiler and modern low temperature radiators that are balanced hydraulically allows for significant energy savings, one building at a time.

If you want more information about saving energy or the simple replacement of old radiators with modern low temperature radiators, don’t hesitate to contact us. We will be happy to answer any questions you might have.