In recent years, technical advancements in underfloor heating systems and radiators have led to efficiency gains as well as a different dynamic behaviour of the heating elements in control loops. To get a clear view on the thermal behaviour of the various modern underfloor heating systems, we commissioned a dynamic simulation of four different systems which gave us important insights in the various heating times and the influence of floor coverings. 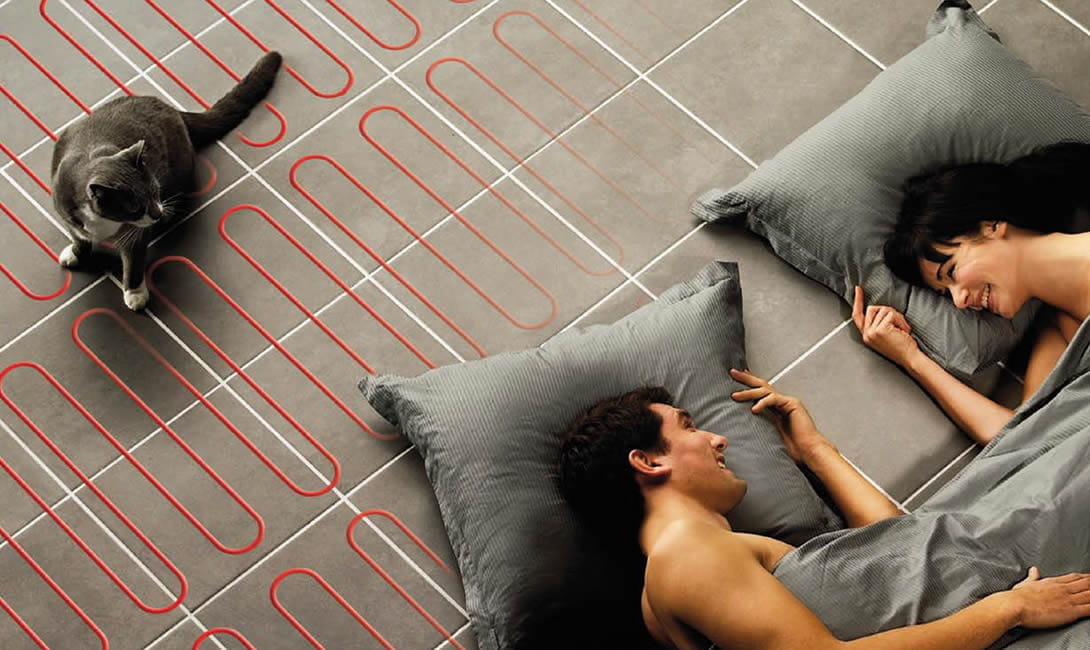 One of the main advantages of an underfloor heating system is its high efficiency due to the self-regulating effects. This ensures that a room doesn’t immediately overheat in case of internal heat gains or strong solar radiation. In order to provide the desired heat output, a large heating surface requires low temperature differences between the room air and the floor surface. So if the room temperature rises, the temperature difference drops considerably without the floor surface temperature having to change significantly, thus keeping the energy consumption to a minimum.

In the past underfloor heating systems had a relatively large time delay in control interventions compared to radiators. For example, after returning home from a winter holiday, an apartment with radiators warms up relatively quickly, whereas underfloor heating takes longer to reach the setpoint temperature. The reason for this is the relatively large thermal storage mass. Luckily, heating technology has come a long way and the simulation we commissioned at the Technical University of Dresden helped us to prove that modern, highly dynamic floor heating systems can react just as quickly as radiators. This is a great advantage in thermally sensitive buildings or in case of a highly intermittent operation.

In the simulation the heating times of four different underfloor heating systems under otherwise identical conditions were calculated. The aim of this is to obtain indications for an optimal product selection, especially in new buildings or well-insulated old buildings. A common standard underfloor heating system consisting of an insulation layer, heating pipes and a liquid screed with a total thickness of 65 mm served as the basis. This was compared with three flat systems that are also suited for renovations.

A classic renovation system without an insulation layer (clickjet S) was compared with the klettjet R system with insulation as a highly dynamic system in wet construction. For both systems, the thickness of the screed layer for the calculation is 21 mm. The fourth system in the comparison was the ts14 R for dry construction, which is also highly dynamic. Including the floor covering laid directly on the system boards and the insulation layer, this system has a total construction height of only 35 to 40 mm and is also suitable for almost all renovation projects due to its low weight. In addition to the low installation height, the ts14 R's aluminium heat-conducting plates, which are firmly bonded to the insulation, ensure a fast and even heat distribution on the floor.

A tile covering was initially chosen for all four underfloor heating systems.

The scientists at TU Dresden simulated the heating times of the floor surface for a temperature rise of 15 to 24 °C, with system temperatures of 35/28 °C. The standard underfloor heating system took 5.6 hours to heat up, whereas the renovation system without insulation (clickjet S) only took 3.8 hours, followed by the klettjet R renovation system with 3.0 hours. The decisive difference between these two systems was the insulation layer, which in the case of the klettjet R reduced heat loss and thus increased the reaction time. The front-runner was the ts14 R with a heating time of only 2.1 hours, which means that the ratio of heating times between the standard underfloor heating system and the ts14 R is about 2.7 for the tiled floor.

The influence of floor coverings

Although initially a tile covering was chosen, the series of simulations was repeated for different floor materials to establish the influence of floor coverings on the heat-up times. The longest heating times were established for parquet floors. Here, the standard underfloor heating system needed 8.9 hours for the heating phase from 15 to 24 °C, whereas the ts14 R only needed 4.1 hours. For carpeted floors, the established times were between the values for tiled and parquet floors.

It’s interesting to note that, while the heating times for parquet compared to tiles are significantly longer, the higher thermal resistance of parquet ensures a more even surface temperature and thus a lower temperature ripple. This means that the combination of parquet and an underfloor heating system provides a higher thermal comfort once the set point is reached.

The results of the simulation show that reducing the thermal storage mass (screed and floor covering), or even covering the system directly with a floor covering (ts14 R), greatly influences or reduces the reaction times. The test also confirms that lowering the room’s setpoint temperature by more than 2 - 3 °C to save energy with an underfloor heating system only makes sense for longer periods of time, i.e. absence over several days.

Now that buildings are becoming more and more thermally sensitive the simulation proves to be highly relevant since it’s increasingly more important to plan in advance and select the best combination of an appropriate underfloor heating system, floor structure and floor covering. On top of that, the correct installation of the heating technology is becoming more and more decisive. This includes hydraulic balancing, correctly designed pumps, an optimally adjusted heating curve and efficient control technology.